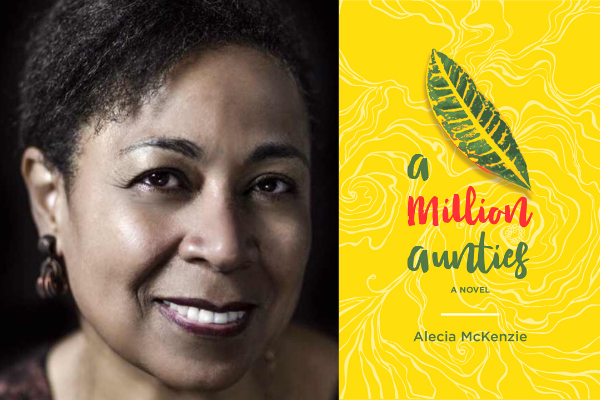 A Million Aunties (Blouse & Skirt Books), the forthcoming novel by award-winning author Alecia McKenzie, is about to get a dual release in the Caribbean and North America. The international publishing of A Million Aunties comes via a strategic alliance godfathered by Kwame Dawes and has the long-term aim of deepening the global footprint of Caribbean publishers. The book gets its NYC release on November 17, 2020 and will be officially launched in the Caribbean a few days later.

The novel has received enthusiastic praise from other writers.

“Under her deceptively revealing title, Alecia McKenzie recreates Jamaica’s enduring traditions in fresh and illuminating ways that make this one of the most avant garde fictions I have read in a long time,” says fellow Jamaican writer Curdella Forbes (A Tall History of Sugar).

“The promise of Blue Banyan Books as a dynamic and urgent literary publishing intervention in the Caribbean is exciting to me, and I believe that a partnership with friends like Akashic Books is exactly the kind of arrangement that can make this reality,” said Kwame Dawes.

Akashic Books secured the North American and Australian rights and publisher Johnny Temple was equally full of praise for the project as well as Blouse & Skirt Books.

“I have long admired the groundbreaking work of Blue Banyan Books and its visionary founder Tanya Batson-Savage. When Kwame Dawes approached Akashic about collaborating with Tanya on a series of books on her Blouse & Skirt imprint, we didn’t hesitate. It’s an honour to be working so closely with one of the most forward-thinking literary publishing houses in a region exploding with world-class talent,” Temple said.

McKenzie has two Commonwealth writing prizes under her belt as well as the Prix Carbet des lycéens for the French translation of her debut novel Sweetheart. Additionally, one chapter of A Million Aunties made the 2019 longlist for the Sunday Times Short Story Prize as ‘Trees’. So, not surprisingly, Dawes explains that starting with McKenzie’s work was a coup for the project.

“Launching this partnership with Alecia McKenzie’s work is a godsend, and it promises for a great future,” Dawes said. “Tanya Batson Savage is a fierce and committed book-lover and entrepreneur, and I can think of no better person to be at the helm of such a project.”

McKenzie reveals she was honoured and pleased to receive Dawes request to participate in the creation of the series.

“At the time, I was trying to rewrite and reconstruct A Million Aunties because the first draft had disappeared with burglars several months previously – gone for good with my laptop. The rewriting was a challenging process, but Kwame’s email provided added motivation to continue. I cannot thank him enough for all he does for fellow writers. My huge appreciation goes equally to publishers Blue Banyan and Akashic Books for their untiring support of Caribbean stories. It has been great to work with Tanya as we move forward,” McKenzie said.

She noted that the collaborative support surrounding the project augurs well for the possibilities for books published from the Caribbean, and explains why she readily agreed when Dawes asked if she had a novella that could be included in the project.

“This initiative is an example of what can be achieved when we work together,” said McKenzie, “putting our energies into backing a vibrant Caribbean publishing sector. I accepted Kwame’s invitation right away for these reasons, to ‘cut a long story short’. But then the novella turned into a novel.”