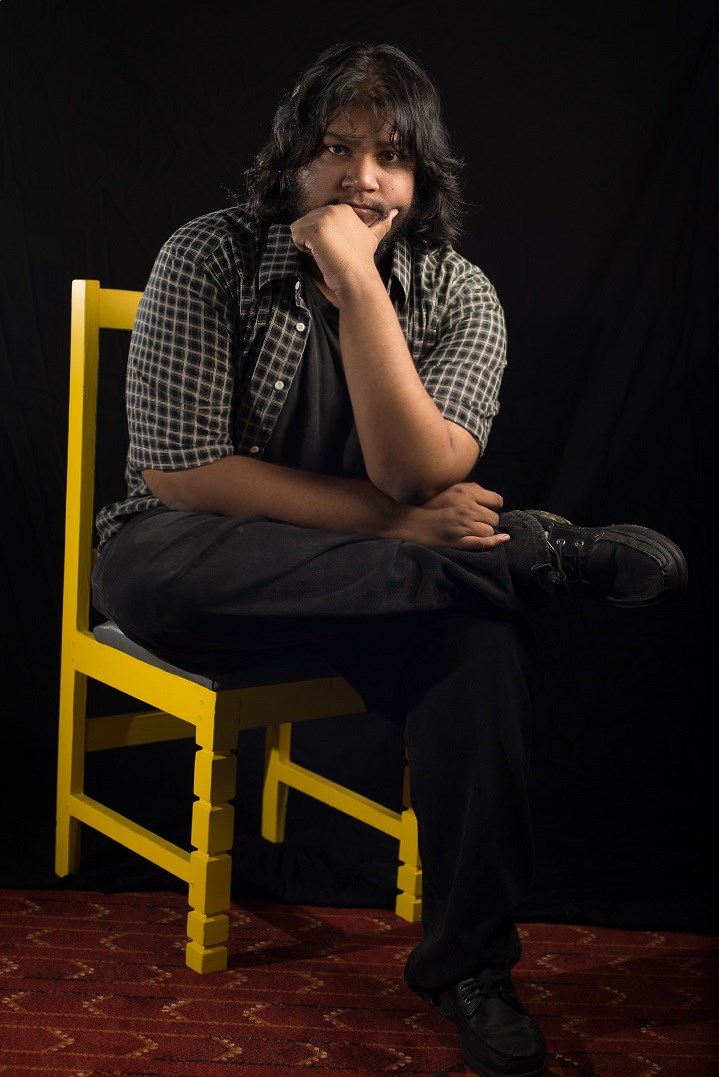 Author Kevin Jared Hosein meets me at Starbucks, MovieTowne, Port of Spain. The usually calm Hosein, 31, is annoyed, his long hair mussed. He’s late for the interview because of traffic and because a workman was tardy. Hosein is working on his house, where he and his fiancee, writer Portia Subran, plan to live when they marry next year. He proposed in March, just before the publication of his third book, The Beast of Kukuyo, a young adult novel that, as a manuscript, won a CODE Burt Award for Caribbean Young Adult Literature in 2017.

“I edited the entirety of Beast of Kukuyo in a Starbucks, so … somewhat fitting,” he had written in our social media chat when I’d proposed the venue the day before.

Hosein is a hot ticket. His second book, the novel The Repenters, published by Peepal Tree Press in 2017, was longlisted for a 2018 Dublin International Literary Award, and he had a short story published in the Commonwealth anthology We Mark Your Memory: Writings from the Descendents of Indenture. Then came the announcement that he’d, for the second time, won the Commonwealth Writers Short Story Prize for the Caribbean region. He won in 2015 for The King of Settlement 4, a story told by a boy living in “the plannings” who gets caught up in a drugs gang.

He might not be here in this Starbucks at all if it wasn’t for Subran, whom he says he met on the Internet when they both trolled the same homophobe. He was depressed, he said. “I was actually in my bed and she come over and I remember I was actually crying, ‘I don’t think that anything’s going to happen. I submitting and is nothing, is just rejections.’

“At that time rejections was fairly new to me, and you seeing the same thing over and over… ‘Sorry we couldn’t…’ It was too painful.

“A week later, The King of Settlement 4 got awarded. She was there for me during all the down times: ‘Just keep doing it. You have to get rejected; it have to happen.’ I feel if I was by myself, especially as I don’t have much writer friends…. It was essential to have somebody behind you to push.”

Hosein writes like he talks: the erudite vocabulary of a well-read man with higher education (he has a UWI degree in biology and environmental science) blended with the everyday Trini Creole of his crime-beleaguered hometown, Dass Trace, Enterprise. He thinks his writing success, like winning the Commonwealth, is attributable to luck, not just talent.

“When I hear Commonwealth I thinking England, I thinking posh, very purple prose-ish, big words – not the kind of thing I would naturally write. I did three stories like that and I submitted it. It wasn’t really something I wanted to write; I just write it for the competition. I don’t know if it had heart in it. It failed. The fourth time, I had old stories, like King of Settlement 4 and thing. I still wanted to enter; you don’t lose anything by entering. So I literally pull one out of the pile and just send it, and it get shortlisted and it win.

“It was strange. I know I liked it but I didn’t think they would like it.

“It was filled with Trinidadian English. From primary school you kind of look down on it, because you’s be studying Standard English so much. The story would not work outside of that language. My fear is that people would read it and get turned off because of the dialect and they wouldn’t understand certain terms. But then I was friends with [poet and reviewer] Shivanee Ramlochan at the time and she was telling me that if people could read A Clockwork Orange that full with all these weird words, and people could read Irish dialect, why we have to feel this way? Why we feel we have to explain ourselves? You don’t have to explain.”

That language in which he writes blends all kinds of references and styles.

“Is not true Trini,” Hosein agrees when I suggest it. “It’s an imagined dialect.

“It take me a long time to comfortably write in Trinidadian Creole. I never had much practice with it. Whenever I was writing it like how we would usually speak, it had something about it – it would ring true but somehow with me it had some other… I wanted to put my own style in it too – it’s a stylistic thing, my own personal signature on it. Characters would talk poetically sometimes. My aim is to make things stick in your head, kind of like Quentin Tarantino’s characters: gangsters quoting [the Bible]. It’s art, [although] it might be based on real people.”

Award-winning writer Kevin Jared Hosein believes Trinidad’s stories can be told in non-traditional genres, such as science fiction, horror and fantasy.
He believes in research. His ideas often come from true stories: “I usually have snippets of Trinidadian stories in my head.” So Passage, the new winning story, evolved.

“When I was in Form Five, 15 years ago, they had a story where they find this family living in the bush and the children was named after cuss-words. You remember that? That story was so strange and sad.”

The family had burnt the body of their dead child in their yard; the family was reported to be living in filth, the children malnourished and kept virtually prisoner in their home in Point Fortin.

“These are not rare things in Trinidad. You have strange things like this all the time.

“I started writing about the family and realised I didn’t have enough information; I wasn’t there, and I don’t want to imagine it. You have to pull back a little bit. You don’t want a story to be one long scream. If a story is one long scream, they [readers] kind of tune out after a while. The horror, the shock, it wears off after a while. It’s better to have calmness, then the scream.”

The protagonist of Passage finds the family; the story is as much his as theirs.

“What would be more shocking is if the person who discovers it is not really shocked at all. He sees it as sorta normal. We see things and that’s normal to us and it’s not normal to other people. Our country is one long scream and you get fed up. At a point you become too emotionally drained to do anything.”

All the regional winning stories will be published in a forthcoming Granta edition.

If Passage is like other Hosein works in its “imagined dialect” and being based on true events, it is different in one regard: the protagonist is middle-aged. Hosein usually writes from a child’s perspective.

“I felt like having a younger person tell the story wouldn’ta work, with the themes of the work. I saw it as a way to branch out, in a sense. Older people speak differently than younger people. It’s also to show the diversity of how we speak.”

He returns to this point later in the interview when he’s talking about The Rebel, his story in We Mark Your Memory.

“Angelo Bissessarsingh,” he says, naming a beloved writer and historian from South who died last year. “I went to visit him some months before he passed. We used to talk online. He said he always wanted to just sit down and talk with me, so I went and he was passing on some stories to me – mostly indenturship stuff – and one was about this Indian driver – they’s call them saddars – him and one of the labourers, right? It’s the story of a sword, the sword that decapitated this driver. They found his head laying in the field.

“The story is about a kid who finds the body.

“You ever read No Pain Like This Body?” The classic by Harold Sonny Ladoo is a desperately sad novel about an Indo-Trinidadian family dying in poverty. “That had a heavy heavy influence on this. Usually I try not to write something after I just read something because I would want to mimic it, but I think in this case it helped. He had a way of representing how the labourers and so on spoke, especially children.

“I’m very interested in how we portray ourselves by language.”

Though Hosein’s writing is literary, it’s also genre: young adult, horror, sci-fi and fantasy. He thinks there must be more genre writing coming out of the region to bring young readers to books again.

“I think when [youth] think Caribbean literature, they just does think, ‘This is something to study, this is something I have to do for test.’ And I think that’s a big problem. A lot of them don’t see that it could be sci-fi; it could be fantasy. It does have it, Caribbean sci-fi, like Nalo Hopkinson; it does have it. But they not exposed to it and they think it’s not something natural; it don’t have much precedence for it. And that’s what they’re into.”

He ought to know; as a secondary school science teacher he spends much of his day with young people.

“I think that the type of books we usually put out, a lot of it is for academics, and the typical person would not find it very interesting. They want to read genre work. That’s why I say we need more horror, we need more YA, fantasy, sci-fi, things like that. That’s what people want to read, and the Caribbean aesthetic could work really good with all of those. I was surprised it never had a true crime novel set in Trinidad; we are the bastion of crime.”

If anybody’s going to do it, it will probably be Kevin Jared Hosein.